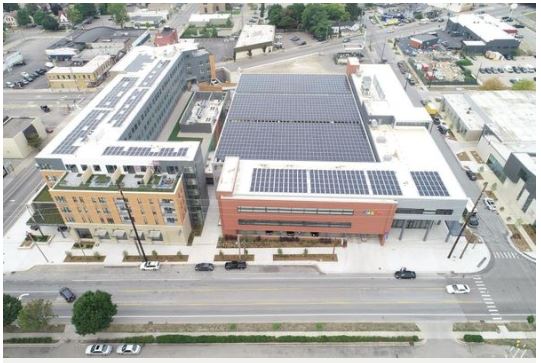 A large solar panel project has been completed that will cleanly power over 100 homes in West Michigan. This one-city-block of solar panels installed on existing buildings could mark the future of electrical grid development. Rockford Construction, partnering with Consumers Energy, installed nearly 1800 solar panels on the roof of a few buildings they own in downtown Grand Rapids along with a battery system to keep the juice flowing even through the long winter nights.

Consumers Energy has a stated goal of generating 40% of their total power output through green energy by 2040 and are well on the way to achieving that mark with 15% currently renewable. The push to renewable energy does present some unique challenges to the public utility companies. For decades they have relied on existing infrastructure that was installed via government grants and subsidies in the 1950s-1970s with little change to the underlying assumptions. Now, many communities are moving away from the large power plant model to the more flexible and cleaner options available to the market.

Residents of Western Michigan have long noticed the gigantic windmills that dot the horizon and generate clean power for dozens of communities across the state. Now, with solar panel cost down a whopping 61% since 2010, much of the additional green energy capacity will become less visible to the average citizen. Many big-box retailers have explored adding solar panels to their buildings and this project provides a proof of concept of sorts. One can only imagine how much invisible untapped clean energy real estate there may be available in the future.